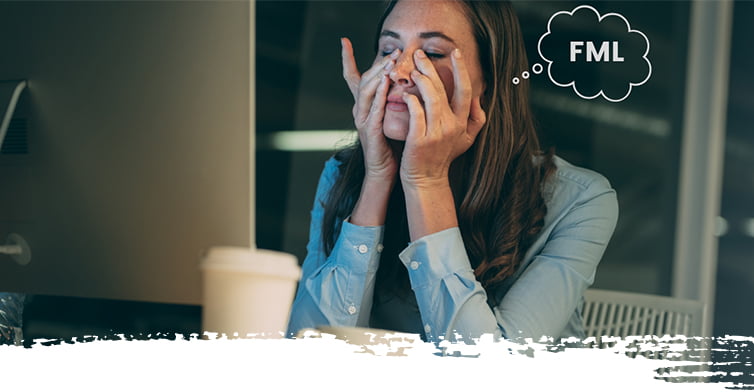 It seemed like such a good idea to open another bottle last night. “Why the hell not,” you exclaimed as you bunny hopped to the kitchen.

By that point you were totally living in the moment and enjoying a break from all the incessant thoughts and responsibilities, so opening another bottle was the only logical thing to do.

You felt so free as you perfectly executed the lift from Dirty Dancing with your dog. The tightness in your chest had gone and you could breathe again – it was good to be alive.

Not so good now though. You just can’t understand why your tongue is still stuck to the roof of your mouth – you’re now on your fifth beverage in twenty minutes but there’s still zero moisture inside your pie-hole…mmmmmm, pie. Maybe that’s the answer?

You check your schedule for the day – you think you can make it. Your first meeting isn’t for another 15 minutes, so if you leave now you should just about have time to get to the convenience store and run to the toilet (so you can smash the pie without anyone seeing how feral you are).

Mission accomplished. You stroll into the meeting with 90 seconds to spare – nailed it. The pie did the trick too – you’re temporarily restored to a level of human that allows you to get through the meeting and ensure your pitiful state goes undetected.

You even manage to contribute to the discussions, which is pretty impressive given the fact that you’re dead inside. At one point you wonder if aliens have taken over your body – intelligent things seem to be coming out of your mouth, but you have no idea where they’re coming from. 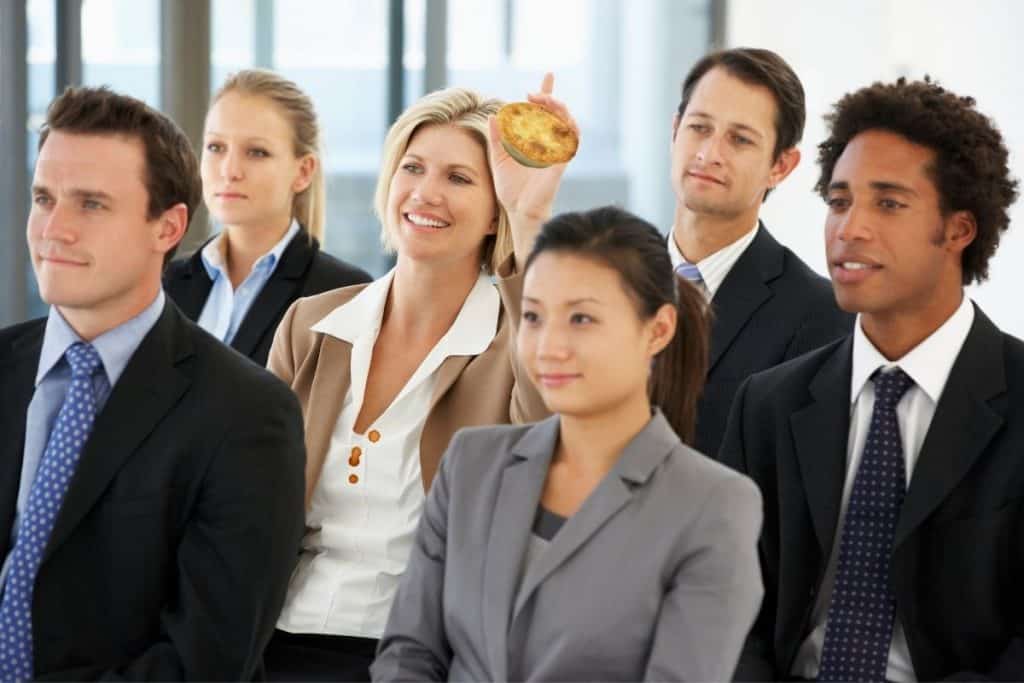 Those idiots – they think you’re a well-rounded professional who has all her shit together, when in reality you’re just bumbling your way through life while trying not to soil yourself.

Unfortunately you’re just about to fail at that too though, so you hot foot it to the bathroom where you can safely allow your pie to fulfil its destiny.

Needless to say, just as you open the floodgates…company arrives. You don’t know who it is but you can tell she’s one of those Type-A’s – they have a very distinctive pee. One that resembles that of a donkey.

It’s a very peculiar thing – you’re not sure if it’s due to the fact that they’re always rushing around so they need to push it out as quickly as possible, or if they’re just so tightly strung the pressure from inside expels the pee with excessive force.

Luckily she’s so wrapped up in her own bullshit though, she doesn’t even realised you’re in there. So you can finish your “paperwork” in peace.

You head back to your office with just enough time to grab a quick energy booster (six Mentos you’d stockpiled in your handbag from a recent conference) before your next meeting.

Fortunately this is just a presentation by the sales team of last month’s performance, so you can put on your pretend interested face on and get lost in your thoughts about how disgusting you are and how much you need to sort your life out.

You almost get caught out at one point when the Sales Manager asks for your opinion on a possible strategy for next month, but you skilfully deflect by saying you trust their expert judgement and are happy to go with their recommendations – empowering for them, while simultaneously masking the fact that you weren’t listening to a word they were saying.

Oooh, you’re good at this whole fake it ‘til you make it thing.

After another successful meeting you have a couple of hours to chip away at your to-do list. You start quite strong, ticking off a few of the easy tasks, but then you get distracted as a wave of nausea overcomes you. You need food…NOW.

You tell your team you’re just popping out, as you awkwardly walk run towards the door – in the same manner as someone trying to quickly cross the road in front of an oncoming car. 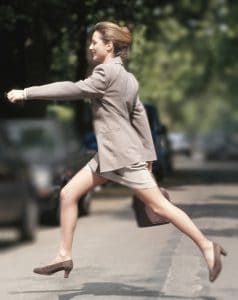 There’s only one thing that will save you now – a quarter pounder with cheese and a thick shake…and fries of course, it’s more economical to get the meal deal.

You slump down in the corner booth next to the toilets and throw the food down your neck. Like a shark attacking its prey, your eyes roll into the back of your head and you don’t come up for air until there’s nothing but the remnants of a rogue gherkin left on your piece of cheese encrusted paper crockery.

Your work here is done.

You head back to the office filled with a sense of calm and satisfaction. The loathing has subsided for now, as you decide that you’ll just start again tomorrow and begin focusing on the future – which takeaway you’ll get for dinner.

The rest of the day passes with a bit of a blur – except when you discover you’ve got your undies on back to front. You spend a good twenty minutes trying to figure out how you’ve made it to 4pm before noticing, given you’re sporting a fairly skimpy g-string today.

Has it been that long since anything happened down there that you’ve now lost all feeling?

You disappear into another blackhole of self-loathing and regret, and eventually give up on the day and decide to go finish at home where you can at least be comfortable in your stretchy pants and oversized 80’s sweatshirt that allows everything to hang free.

As you finish your last slice of pizza and start the next episode of The Real Housewives, you wonder what it would be like to have the perfect life like those bitches on TV.

They’re always drinking booze and never have regret. And they never seem to be compelled to eat burgers the day after – you just don’t understand how that’s possible. And they of course have the perfect bodies and always look well put together, with all their clothes on the right way round – talk about living the freaking dream.

Maybe that’s the secret? No regrets? Hmmm, now there’s an interesting idea. You think about your day and realise that every time you felt shit, or ate shit, it was a direct result of negative thoughts and feelings about drinking the night before.

Even though you’d had a wonderful time and felt more present than you had in ages, you’ve labelled drinking as “bad” because it contains calories, so as soon as you take one sip you figure you’ve fucked everything and go straight to self-destruct mode without passing Go.

You start to realise how ironic it is, that as soon as you start thinking you’ve fucked it – you fuck it. That’s the tipping point where you go from enjoying something in moderation to taking it to the extreme.

So maybe there is something to this no regrets thing? Maybe if you just enjoy the things in the moment, rather than wrapping them up in all your fears and insecurities, you too can have the perfect life…or at least an easier and less stressful one?

Your mind’s initial response is that this gives you a green light to eat and drink everything you want – after all, as long as you’re doing it in the moment then it’s ok, right? But you quickly realise you’ve gone to the extreme again (oh how you love it there).

As you turn back to the TV you catch a glimpse of all the photos you’ve got hanging on your wall of you with various friends and family members, and achieving different milestones throughout your life. Your previously resentful face turns to a smile. You start to remember – that’s the shit that’s important. Turning up for those people and having good times with them, and achieving more milestones…oh, and bloody enjoying yourself along the way instead of constantly sweating the small stuff.

You think about how much easier all that will be if you’re living in moderation mode, rather than this constant cycle of all or nothing and feeling shitty about yourself.

That’s it! You decide it’s time to say “Fuck it” – but no longer in a ‘jump off the wagon’ kind of way, in a Pretty Woman kind of way – you say who, you say when, you say how much.

That’s right, you’re getting back in the driving seat and you can do anything you want to baby!