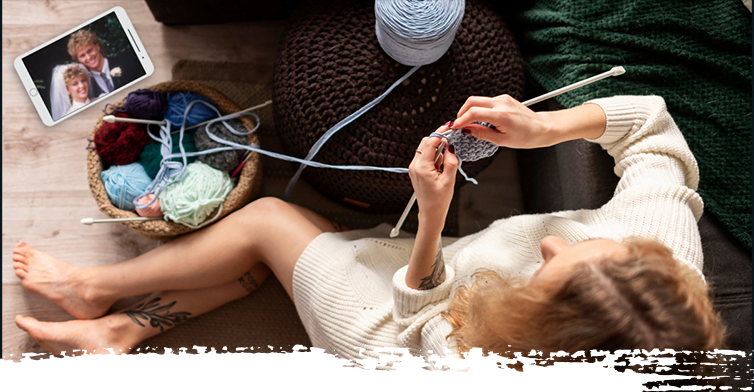 Solopreneur, Jessica Garida, has attracted the attention of the media this week after photos of her side project went viral.

In the space of only 10 days, Ms Garida went from never picking up a crochet hook or darning needle in her life, to crocheting the entire cast of Neighbours – circa 1988 in homage to Scott and Charlene’s wedding.

Producers of the hit TV show snapped up the all the rights to Ms Garida’s masterpiece immediately. A Neighbours spokesperson commented, “Given that the last episode of our long running show is due to air next month, we can’t think of a better way to honour its success than immortalising our iconic characters in yarn.”

As such, we unfortunately cannot publish the photos at this time, but we’re told they will become available again once the work goes on display at the soon to be open Neighbours Museum in Victoria.

It seems the buzz hasn’t all been positive however; reports have come in that Ms Garida has sparked unrest amongst the crocheting community.

According to the Editor in Chief of, “I Found My Way With Crochet”, a popular magazine aimed at reforming petty criminals through needlework, doubts are circulating regarding the validity of Ms Garida’s story. “It just doesn’t seem possible that someone could acquire such an intricate skill in such a short time.”

When asked to respond, Ms. Garida commented, “Never underestimate the power of procrastination.”

Apparently, while attempting to reconcile her transactions from the last quarter and prepare her paperwork for the end of financial year, Ms Garida found herself in an all too familiar Instagram rabbithole.

“I only intended to pop on quickly to share my breakfast bowl with my followers, and before I knew it I’d followed a trail that led to an endless loop of crocheting tutorials.”

To be honest, the days following that are kind of a blur. I remember I kept trying to come back to my accounting, but the pull of the yarn was too strong.”

“I knew there would be serious consequences if I didn’t submit my paperwork on time, but as soon as I picked up that darn needle all my anxieties just melted away.”

Ms Garida went on to say that while she’s happy she learned a new skill and made such an important contribution to the institution that is Neighbours, she now plans to use crochet as a tool to grow her business rather than hold it back.

Having sought expert intervention, Garida is working towards the point where her needlework is no longer a method of procrastination, but rather a way to momentarily switch off her brain so she can counteract the stress response and tackle her business tasks more easily.